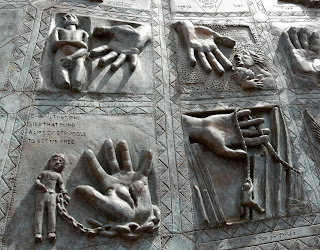 In the second half of my film, I show Momma Grace having sexual relations with men in her husband's bed while Isabelle is tied to the cellar stairs. The actions excite the dog and he begins to chew on Isabelle's ears. Isabelle can't feel because she is being subdued by the men by them putting drugs in her baby bottle and even some instances of poison to slow her actions down even more-not to bother them while they come and go having sex with the mom. The men reveal what Momma Grace has to do with them to stay in the country. Dad explodes with anger by finally confronting his feeling of Momma Grace's actions toward Isabelle. He can't handle it and dies.

I show an explosion in the house as Isabelle starts having seizures and convulsions. The town doctor screams at mom at the sight of Isabelle's ears. CPS intervenes and Isabelle shows her magical enchantment of what life is to her-confusingly even after everything she has been through. Isabelle's illegal abortion kicks in and she ends up in the hospital. This connects the doctor who has suspected foul play onto Isabelle since she was a baby. All the stress blows up and Dad dies from it. Isabelle goes into a frantic sleep tossing and flashing back filling in all the spaces and questions of what has been going on. The drugs, sex, and abuse on Isabelle's body is all revealed through her flashbacks.
Posted by lorijeanfinnilainthekitchen at 4:57 PM