About 35 times I went to the police. I went before I was drugged in Nashua, N.H. I had made reports beforehand to the disruptions in my room I was renting to no avail. I was demeaned and made into a performance of some sort of the report/reports. Once drugged, I was told by detectives to go to bars and not leave the city as though I were a criminal, I know the second to demean me more. Not sure if these were friends of the culprit. Obviously I eventually left the city, but not before I was supposed to seemingly being coerced at that time in the office of the detectives into saying that a 'Mike' will take over, looking in my eyes for acceptance to this as though my word was the full lease to their actions.
The next over twenty years was, not known to me at the earliest time, a 'Mike' that pushed me into sex
through the eventual break down of my body being drugged. He stalked me and beat me when he could break into my apartment. I was a girl alone in New York City thriving on my own to someone or someone's dissatisfaction. I had routine surgery and a group of three men who apparently found me attractive came in and foul played with the anesthesia box which left me vulnerable from the onset of the physical complications. I was threatened to be arrested in New York City when I tried to report the
complications and tampering I felt took place in the hospital.
I watch documented movies of other countries with high rapes reported, we have very high rapes as well in the states with no reports filed. I fought so hard to get my reports filed before they happened but only got advised reported and was told I would only get this. My druggings grew worse everywhere I went in my foods and in my dwellings, and at times those who would be around me. Being a woman here in the states is just as bad as any other country apparently if it's felt that there is access. 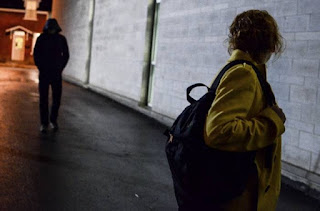 Thank you to Malta Today for the image.

Posted by lorijeanfinnilainthekitchen at 11:22 PM